Built by the French next to historic rue Catinat in 1872, Saigon Municipal Theatre is one of the city’s most iconic landmarks.

Its history is quite eventful and turbulent and here’ s a summary.

Did you know that the first purpose-built city theatre was constructed in 1872 on the site of today’s Caravelle Hotel?

It was originally built to entertain Saigon’s developing middle class in French colonial times. At the time it specialized in comic operas.
Made of wood, it burned in 1881 and was reconstructed in stone the following year.

Later it was decided that Saigon needed a much larger and more elegant theatre building to reflect the power of the French empire.
A number of French Architects were involved with the creation of this third building and it was completed in 1898. The current theater was inspired by «The Petit Palais» in Paris built the same year. The ornaments, balustrades and roof of the theatre building were originally imported from France.

Fun fact: at the time the theater could only function 4 months a year (from October to January) because of the heat!

Later, the façade got remodeled during the Japanese occupation of Indochina in the beginning of 1940’s. Then it finally got severely damaged by Allied bombing in 1944. Closed during World War II, it reopened in 1955 after the Geneva Convention and became the Southern Vietnam’s Assembly House.

In May 1975, it was officially named Saigon opera house.

It finally reopened as a theatre in 1982 and was completely refurbished and modernized at the end of the 1990’s with French support to commemorate the 300th anniversary of Saigon.

Saigon Opera House was certified as a national relic in 2012. Nowadays, with its 468 seats, it still daily provides high-quality performances.

You can look at its programme right here.

If you are interested in getting an overview of Saigon’s essentials in a short time and in an original way, join our vintage car tour. 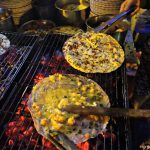