Saigon Central Post Office is one of the most impressive colonial buildings of Ho Chi Minh City.

It counts with Gothic, Renaissance and French influences. It was designed and constructed by the French between 1886 and 1891. It is a beautifully preserved remnant of French colonial times and perhaps the grandest post office in all of Southeast Asia. Inside at the far end of the building, don’t miss inside the large portrait of Ho Chi Minh hanging high above everyone. Painted onto walls overhead are two maps of the region, one of them showing the telegraph lines that crisscross Vietnam and Cambodia and the other displaying a map of the Saigon region in 1892. It’s open every day from 7am to 7pm.

Often erroneously attributed to Gustave Eiffel, the Post office has been built between 1886 and 1891 by architect Marie-Alfred Foulhoux on the site of the former headquarters of the Commandant des troupes.

On its outside plaques, you can see the names of famous people including Samuel Morse, Benjamin Franklin and Michael Faraday. The reason is that Foulhoux intented to illustrate Human advancement.

Behind the large portrait of Ho Chi Minh on the rear wall, is the city’s coat of arms, inscribed with Paulatim crescam, “Developing little by little”. But it was covered over in 1975 so it is not possible to see it anymore now.

If you want to explore Saigon in an original way and get an overview of the city’s essentials in a short time, don’t miss our morning drive. 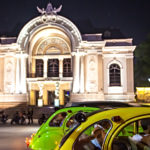 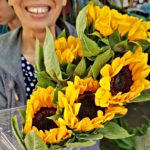